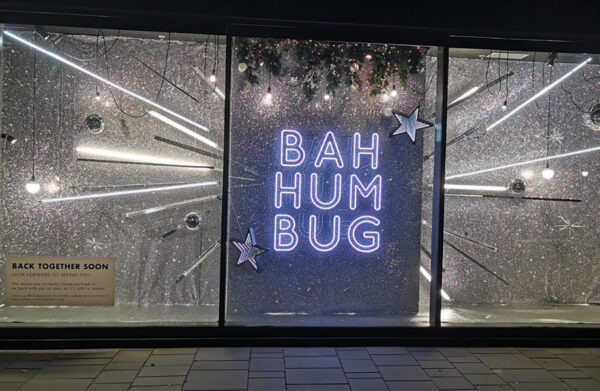 Luxury retailer Harvey Nichols, whose Bristol store can be found in Quakers Friars, have unveiled the most anticipated window scheme of the year – Christmas.

Bah, humbug! Let’s bring some cheer to the year

While 2020 may have us sighing a collective ‘Bah, Humbug!’, not everything is Scrooged , including Harvey Nichols’ new window display. Designed to spread some much-needed cheer during this festive period, the iconic windows feature a pared-back colour scheme in shimmering mirror and silver, highlighting uplifting messages written in beaming bright lights.

Focused on a neon ‘Bah, Humbug!’ filling the windows along their Quakers Friars facades, the simple message is adorned with star motifs, twinkling mirror balls and blinking lights. Radiating bars of silver and platinum, combined with warm white lights, burst from either side of the tongue-in-cheek expression, while a further message looks positively to the future, simply stating, ‘Bring On 2021’. 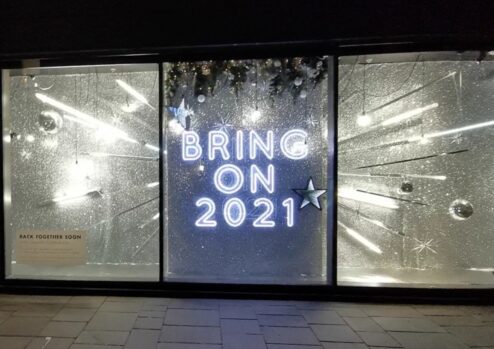 Janet Wardley, Head of Visual Display at Harvey Nichols, says: “2020 has been a year unlike any other. We’ve come up with a concept that looks forward to the new year, whilst also reflecting the sentiment that many of us are feeling at present. All done with Harvey Nichols’ sense of humour that we hope will raise a smile in passers-by.”

The window displays are in Harvey Nichols stores in the UK and Ireland.

At Beyond Retro in Bristol Shopping Quarter they are all... Read more >