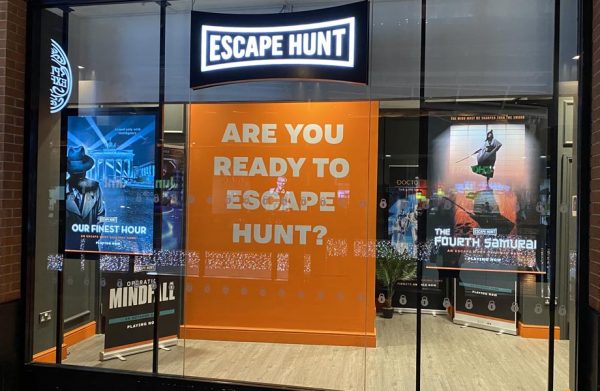 Escape Hunt is the world’s fastest-growing and most exciting themed entertainment phenomenon. It was launched five years ago and since then players have clocked up more than 25 million minutes of Escape Hunting in almost 30 countries and 50 locations worldwide, from Sydney to Paris, Dubai to Houston. Now it’s in Bristol too.

The Fourth Samurai is an Escape Hunt original production that can be played at Cabot Circus. Escape Hunt experiences challenge you to use your mental agility to solve a mission and secure your freedom in a race against the clock.

WWII. As a team of British secret agents, you know only one thing can save your country from Nazi invasion: cooperation.

Whichever game you choose – the lock clicks. The clock ticks. Time is of the essence! You’ll have to work as a team to beat the clock and maybe, just maybe, experience the thrill of escaping.

Whether you’re planning a fun activity with friends or family, a social event or corporate team building, dial up the excitement by going to Escape Hunt.

Blackbeard is dead, his loot lies unguarded. Sink or swim? It’s up to you.
Step onto a pirate galleon in the middle of a battle for control of the High Seas. Your captain, the terrifying Blackbeard, has just been killed and his ship is shot to pieces and sinking fast.

With no chance of victory, you and your scurvy shipmates decide to jump ship – after helping yourself to the contents of Blackbeard’s legendary treasure chest.

You’ve broken into his cabin to grab all you can, but now the door has jammed shut and you’ve just 60 minutes to escape; any longer and you’ll drown – if the sharks don’t get you first.

The Doctor needs you: a tear in space and time has been detected, and the Cybermen are about to break through!

Step into the future. Enter the offices of ChronosCorp HQ, where eccentric billionaire Alastair Montague’s efforts to develop commercial time travel have caused a tear in the fabric of space and time. The Cybermen are ready to take advantage and attack Earth.

You, the Doctor’s friends, must investigate the incident. The remains of Montague, his prototype time engine and the extensive collection of time-related artefacts acquired over the course of his experiments, are all that you have to work with.

In just 60 minutes the Cybermen will break through. The fate of the universe is in your hands. Take too long and the human race will be “upgraded”.

A deadly virus, a top-secret research programme and 120 minutes to save the world from losing control of their minds.

Step into the midst of an undercover spy operation. Your team of secret agents have been handed classified information about Spider Tech, the company behind a top-secret research programme that, if successful, will give them the power to control the human mind.

Spider Tech have leaked a dormant but deadly virus into the global water system. In just 120 minutes time they will activate the virus from their secure HQ servers in Bristol and gain control of the world.

Under the code name Operation Mindfall, your team must find the anti-virus and destroy Spider Tech’s servers. Pressure from foreign governments is mounting, the clock is ticking and the fate of the world rests in your team’s hands.

A citywide game. Step back in time to a world of mythical beasts, separated from mankind via a series of magic portals. One of these portals has broken and creatures have broken through, causing chaos on the streets of Bristol. You have 120 minutes to find and fix the portal and save humanity.

For Operation Mindfall and Magic Portal, tickets cost £45 per team of 2-4 players.

On Tuesday 24 May, John Wesley's New Room would like to... Read more >

To celebrate the Queen's Jubilee, F.Hinds the Jewellers... Read more >

Horological Underground  located in the Arcade, is... Read more >