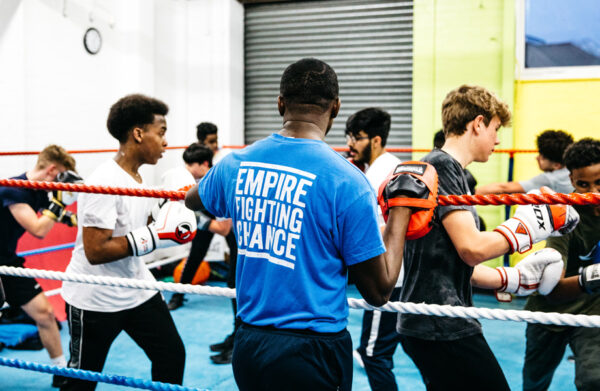 Empire Fighting Chance will be one of eight charities benefiting from this year’s Tour of Broadmead, and one of five good causes making their event debut in 2021.

The Tour of Broadmead is inspired by The Tour of Britain, which this year takes place from 5 to 12 September. The event is organised by Broadmead Bristol BID (Business Improvement District) and supported by PureGym Union Gate and The Galleries.

Empire Fighting Chance was born on the streets of Bristol in 2006 to fight the impact of deprivation on young people’s lives. Rising from the Empire Amateur Boxing Club in inner city Bristol, they have grown to become a multi-regional charity using a pioneering approach that harnesses the power of boxing to transform young lives.

They exist to support young people from deprived neighbourhoods. Most live in poverty poor housing and workless households. The toll that poverty takes on families is huge and can include family breakdown, abuse and household dysfunction. Significant numbers of young people they support are from communities experiencing racial inequality. Faced with conditions that are toxic to wellbeing, they struggle with their mental health. Their distress is often expressed in ways that can lead them into trouble, including poor behaviour in school, drug misuse and gang crime. The multiple complex issues they face prevent them from engaging in education and employment.

They use a powerful combination of non-contact boxing and intensive personal support to change the way young people think and behave.

They now reach around 5,000 young people each year across Southwest England and Wales. Their unique approach means young people gain support in ways that feel natural, encouraging them to turn up, trust them and make positive changes in their lives. Despite the chronic adversity that they face, young people are returning to school, exiting gangs, getting work and feeling healthier and happier.

The Tour of Broadmead

We hope to boost the charity’s coffers on day six of Tour of Broadmead 4, when Empire Fighting Chance volunteers  as well as staff from retailers in Bristol Shopping Quarter to replicate Stage Six of the Tour of Britain, which will see riders cycle between Carlisle and Gateshead on 10 September. Distance 192.7km.

Once again we are grateful to Pure Gym Union Gate for their support and the loan of two static bikes, which will be located outside M&S if it’s dry and inside The Galleries if it’s raining.

Volunteers from Empire Fighting Chance will be on hand throughout the day, talking to shoppers about their work as well as holding a bucket collection. Donations can also be made using the contactless donation points by Tesco Metro and Primark and online at empirefightingchance.org/get-involved/donate/

Click HERE to find out more about the Tour of Broadmead including details of our other beneficiaries as they are announced.

Fancy a bite with your little ones? At M&S in... Read more >

To celebrate the opening of their new shop in Quakers... Read more >

For a limited time only, pay £0 joining fee when you... Read more >